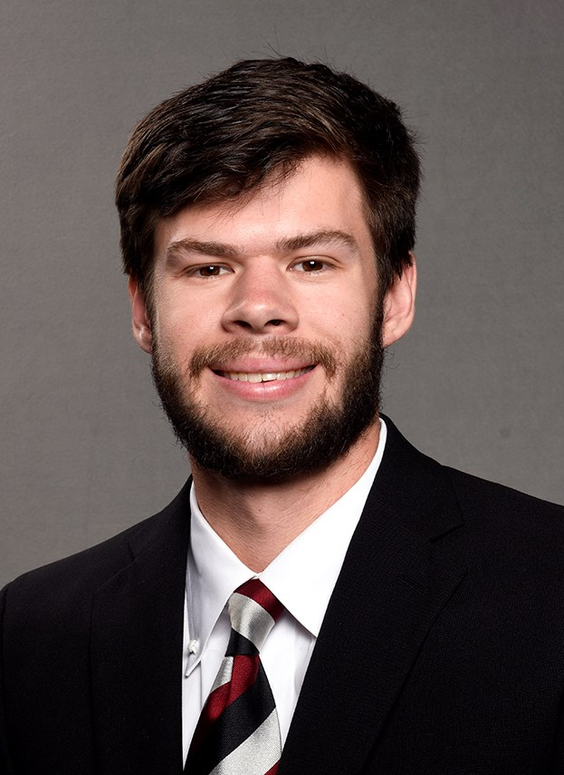 Five-year starter, the first in school history… took advantage of the NCAA ruling to allow him to return for a sixth year and fifth season… became the school’s all-time leading scorer with 368 career points, surpassing Elliott Fry’s mark of 359 points scored… ranks among the top-3 in school history in field goals made (T1st-72) and attempted (1st-99) and PATs made (2nd-152) and attempted (2nd-154)… ranks fifth PAT percentage (.987)… converted 48-of-54 (88.9 pct.) field goal attempts from inside 40 yards… has a career long of 54 yards… logged six fourth-quarter or overtime game-winning field goals in his career, providing the deciding points in wins over Louisiana Tech (2017), Tennessee (2017), Missouri (2018), Tennessee (2018), Georgia (2019) and East Carolina (2021)… has also kicked off 96 times in his career… is the school’s all-time leader in games played with 60.

Named second-team All-SEC and Honorable Mention All-America by Phil Steele… named third-team All-SEC by ProFootballFocus… selected by the Carolina coaches as the Dr. Harris Pastides Outstanding Student-Athlete Award winner… selected by his peers as the Jim Carlen Award winner, as the MVP of the special teams… named one of five Rex Enright permanent team captains…  missed just one kick all season, converting 16-of-17 field goal attempts and all 30 extra point attempts, for a team-high 78 points… had his streak of 59-consecutive games played snapped when he did not appear against Clemson in the 2021 regular season finale… was twice named the SEC Co-Special Teams Player of the Week, earning that recognition against East Carolina when he converted a 36-yard game-winning field goal as time expired, and again against Florida when he hit on a career-high four field goals and scored a career-high 16 points… booted a career-long 54-yard field goal against Kentucky… served as a game captain against Kentucky, Missouri and North Carolina… named the 2021 Harold White GPA Award winner for Special Teams.

Ranked second on the team with 59 points scored… converted 11-of-19 field goals, including 11-of-15 from inside 50 yards, and 26-of-27 extra points… made at least one field goal in all nine games in which he had an attempt… made his first four field goal attempts of the season, extending his streak to 14-straight, before missing from 53 yards in the rain at Vanderbilt, one shy of the school record… scored a season-high 11 points against the Commodores… connected on six of his first seven field goal attempts… handled some kickoff duties late in the season, booting nine kickoffs for a 55.6-yard average… named to Athlon magazine’s 2020 preseason All-SEC fourth-team unit… selected to the SEC Fall Academic Honor Roll.

Redshirt junior placekicker… connected on 18-of-22 field goal attempts, 81.8 percent, and all 25 extra points for a team-leading 79 points scored… ranked ninth in the SEC among kickers at 6.6 points per game… his 1.50 field goals made per game ranked third in the conference… his 81.8 percent field goal percentage tied for third in the SEC with Georgia All-American Rodrigo Blankenship… three of his four misses came from 50 yards or beyond… connected on his final 10 field goal attempts on the season… drilled a 24-yarder in the second overtime to upset No. 3 Georgia… nailed a career-long 50-yarder against Appalachian State… had three field goals against both Alabama and Appalachian State, giving him five for his career… named to the SEC Fall Academic Honor Roll for a third time.

Redshirt sophomore who may have been the most improved player… shared the Joe Morrison Award (MVP on special teams) with punter Joseph Charlton… was successful on 58-of-62 attempts, going 13-for-16 on field goal tries (including a career-high tying 3-for-3 at Vanderbilt and vs. Missouri) and 45-for-46 on extra points… his 84 points scored ranked in a tie for 10th on Carolina’s all-time single-season scoring list with George Rogers Heisman Trophy season of 1980… earned co-SEC Special Teams Player of the Week accolades for his performance in the win over Missouri… hit on all three of his field goal attempts, connecting from a season-long 42 yards on two occasions, and a 33-yard game-winner with just two seconds remaining… all three of his field goals came in the second half when the field conditions were soggy due to a rainstorm, and gave Carolina the lead… also kicked off 19 times with 12 touchbacks… named to the SEC Fall Academic Honor Roll.

Added to the roster as a walk-on in January… handled the kickoff duties… logged 44 touchbacks among his 65 kickoffs (68 pct.)… took over as the full-time starter on placements in game 4 against Louisiana Tech… led the team in scoring with 68 points… connected on 14-of-25 field goal attempts overall, but was 10-for-11 inside 40 yards… converted all 26 extra point attempts… missed his first four field goal attempts before connecting from 31-yards out with just four seconds remaining in the contest to lift the Gamecocks to a 17-16 win over Louisiana Tech… had his best day as a Gamecock in the win at Tennessee, connecting on field goals of 47, 21 and 36 yards in a 15-9 victory… went 2-for-3 in the win over Vanderbilt, with makes of 44 and 39… also made 2-of-3 field goal attempts in the Outback Bowl win over Michigan, including a 44-yarder… connected on 11 of his final 15 field goal attempts on the season, with the four misses coming from beyond 45 yards.

Was enrolled at South Carolina but did not participate in football.

Graduated from Wando High School in Mount Pleasant, S.C. in 2016… was a two-time Special Teams Player of the Year for the Warriors.

Parker H. White was born July 24, 1998… is a sport and entertainment management major who graduated in May of 2020… working on his Master’s degree in business administration… represents football on the campus student-athlete advisory committee (SAAC).