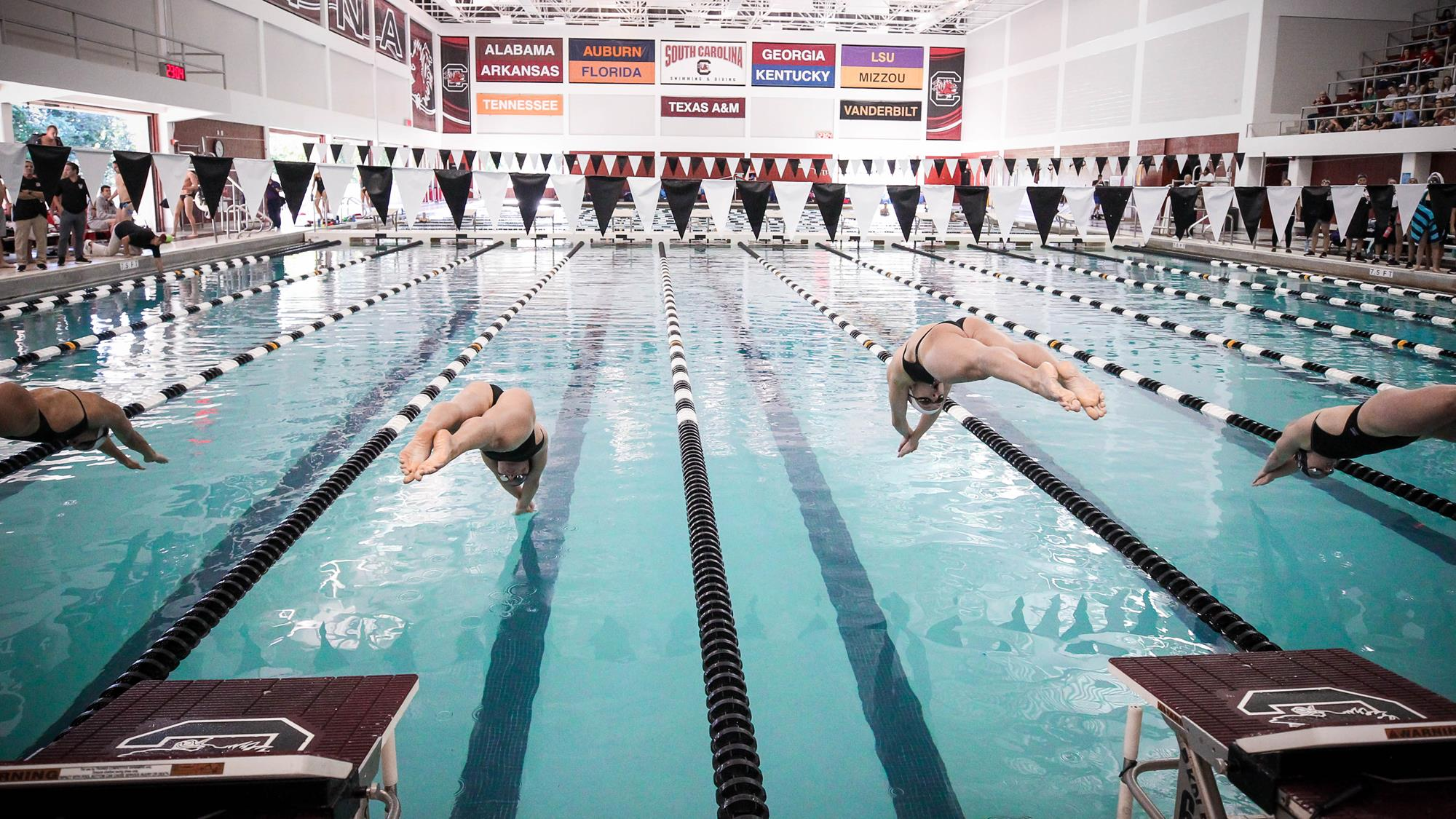 South Carolina women’s swimming and diving will compete in its second dual-meet of the year as it hosts No. 23 Arkansas on Saturday at 2 p.m. at the Carolina Natatorium/Blatt PE Center.

COLUMBIA, S.C.— South Carolina women’s swimming and diving will compete in its second dual-meet of the season as it hosts No. 23 Arkansas on Saturday at the Carolina Natatorium/Blatt PE Center beginning at 2 p.m.  The Gamecocks get set to face their first SEC opponent of the season after four first-place finishes in their season opener last Friday against 11th-ranked NC State.

South Carolina topped Arkansas 155-145 last season in a tri-meet in Colombia, Mo., which also included the University of Missouri.  Emma Barksdale had first-place finishes in both the 500 free and 200 IM while Christina Lappin took first in the 100 free.

The Gamecocks were led by upperclassmen in their home opener against NC State last week as Barksdale (200 IM), Mikaela Lujan (1M dive), and Marissa Roth (3M dive) each won once and finished at least third in all of their respective events.

GAMECOCK NOTEABLES
– Emma Barksdale swam the fourth-fastest 200 IM (1:59.22) in the country against NC State, her first B-cut swim of the season.
– Mikaela Lujan bagged her first event win of the season with a 270.08 on the 1-meter spring board and followed up with a second-place finish on the 3-meter (305.63).
– Marissa Roth also got off to a strong start with a pair of top-three finishes including her first-place 314.93 score on the 3-meter board.
– Christina Lappin swam the 14th-fastest 50 free (22.97) in the country to finish third against NC State last week.
– Freshman Kate Sanderson finished third in the 1000 freestyle (10:01.64) last week in the first collegiate meet of her career.
– Freshman Hallie Kinsey also got her collegiate career off to a strong start with top-three finishes in both the 100 fly (55.39, 2nd) and the 200 fly (2:01.47, 3rd)
– Melinda Novoszath, another Gamecock true freshman, finished second in the 200 fly (1:59.27) last week against NC State.
– The Gamecocks took first, second and third in the 400 free relay against NC State last week with the team of Lappin, Emily Cornell, Novoszath, and Barksdale taking first with a time of 3:26.83.
– South Carolina is 10-4 all-time in dual-meets against Arkansas including last season’s 155-145 win in Columbia, Mo.

SCOUTING THE RAZORBACKS
– Arkansas came in at No. 23 in the latest CSCAA Coaches Poll (10/17) and are one of eight SEC schools in the top-25.
– Arkansas tallied 14 top-three swimming finishes and four top-three diving finishes last week against seventh-ranked Georgia.
– Defending 1-meter national champion Brooke Schultz was named SEC Diver of the Week after winning both 1M (342.90) and 3M (359.10) boards against Georgia last week.
– Arkansas finished 27th at the NCAA Championships and 10th at the SEC Championships last season.

QUOTEABLE: HEAD SWIMMING COACH MCGEE MOODY
“We saw (Arkansas) last year at a tri-meet out at Missouri and we certainly know that they’ve got a talented group.  Coach Harper has brought in a very talented group of freshmen and transfers this year and our women know that they’re going to be in for a challenge this Saturday. The biggest thing I want to see out of our group going into the meet is energy.”

QUOTEABLE: HEAD DIVING COACH TODD SHERRITT
“We’re coming off a solid week in which we achieved many of our objectives and that’ll continue to be the focus as we progress towards a good SEC and NCAA Championships. Arkansas has a very good team with a defending NCAA Champion on the 3-meter, but if we come out and continue to obtain each of our objectives, it will be a very successful meet.”

UP NEXT FOR THE GAMECOCKS
South Carolina will hit the road for the first time next week as both the men’s and women’s teams travel to Chapel Hill, N.C., for a dual-meet against North Carolina on Friday at 3 p.m.