Newcomers in Receiving Corps Look to Make Names for Themselves

Some newcomers to the South Carolina receiving corps are hoping to make names for themselves in 2022. While there is a lot to be decided in a deep wide receiver and tight end room, you have to love the nicknames with “Juice,” “Rockstar Ruck,” and “Stog.”

“That nickname came about when I was little, playing pee-wee football,” said junior receiver Antwane “Juice” Wells, who transferred from James Madison, where he earned Second Team All-America honors last year and Freshman All-America accolades in 2020. “I guess I used to juice the ball a lot – running fast, breaking tackles, scoring touchdowns. It was just a lot of juice!”

“I could party in high school,” said receiver Corey “Rockstar Ruck” Rucker with a grin. He earned Freshman All-America honors at Arkansas State last season. “There was a rapper who had a song called ‘Rockstar lifestyle.’ I used to say that all the time. I’ve grown up now though, and football is the priority. I love it here. I grew up in Yazoo County, Mississippi. It’s a very small town. Where I’m from, we have two gas stations and a Dollar General, so Columbia is a big town for me.”

Coming off a thrilling Duke’s Mayo Bowl win to end last season and with the addition of some outstanding offensive talent, including Rattler at quarterback, there is a lot of excitement about a potentially more explosive offense for the South Carolina Gamecocks. So, who will rise above the rest to create that excitement in the passing game? There are plenty of good candidates to keep your eyes on.

“I want to root guys on and motivate guys around me. I want to be a good teammate. Just put me anywhere.” 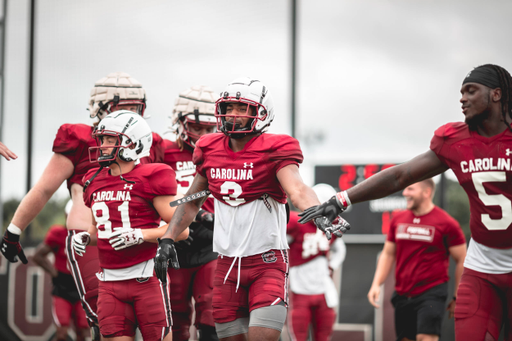 The Gamecocks return their top three receivers from a year ago with Josh Vann (43 catches, 679 yards, 5 TDs), Jaheim Bell (30 catches, 497 yards, 5 TD), and Dakereon Joyner (24 catches, 241 yards, 1 TD), along with several other veterans. But what do the new guys bring to the table, other than some cool nicknames?

“I think I’m tight end that can do it all in the passing game as well as the blocking game,” Stogner said. “I’ll run down the seams, make contested catches and go over the middle as well as block and get my hands dirty.”

“I just want to be a good team player,” Rucker said. “Whatever my role is, I want to accept that. It’s a new school and a new situation, so you have to adapt. We are super deep. We have a lot of talent all over the place. It’s a beautiful thing because it forces you to work hard. You can never take a play off. I think that’s going to be really good for us.”

“I just want to be a playmaker,” said Wells. “I want to root guys on and motivate guys around me. I want to be a good teammate. Just put me anywhere. I’ll go anywhere on the field. I like all the routes: go routes, digs, whatever. Hopefully I can be a primary guy, but we’ll just see how the season goes. We’re just focused on winning games and bringing championships here.”

Wells caught 116 passes for 1,853 yards and 21 touchdowns in his two seasons at James Madison, while Rucker caught 75 balls for 1,279 yards and 14 touchdowns in two years at Arkansas State. Stogner caught 47 passes for 654 yards and eight touchdowns as a tight end and H-back in his career with the Sooners.

Each graciously names someone else on the receiving corps as to who they think is the “go to” guy on third and long, with the exception of “Stog,” who has his own ideas for picking up a first down.

“I’d go four on the right side, and then run a reverse with the offensive tackle and have him take it around and score,” Stogner said with a grin.

Time will tell what sort of impact they’ll have on the Gamecocks, and each is hoping their names will be called often in 2022.