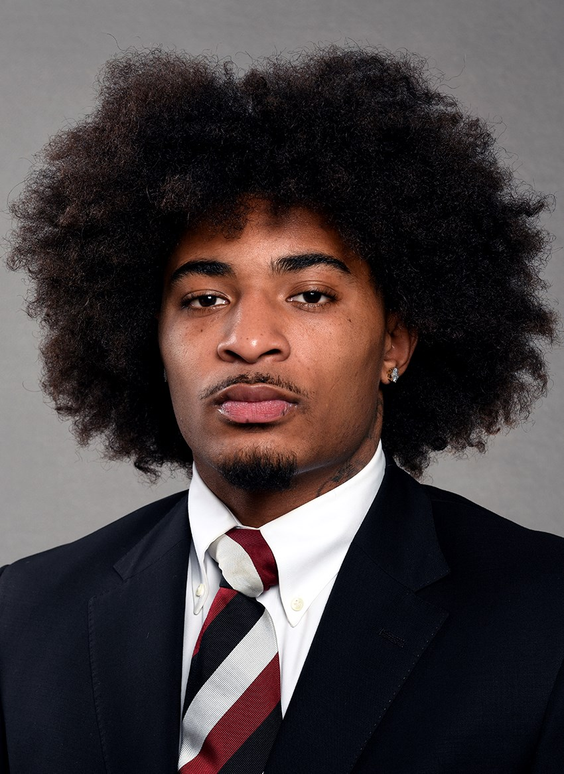 2021 (Sophomore)
Started all 14 games at wide receiver… eamed FCS second-team All-America honors from Stats Perform and HERO Sports… also named a HERO Sports FCS Freshman All-American for the second time… Phil Steele listed him on the FCS fourth-team All-America and Freshman All-America lists… earned first-team All-CAA honors for the Dukes… named the VaSID University Division Offensive Rookie of the Year and first-team all-state… logged 83 receptions for 1,250 yards and 15 touchdowns… tied the JMU single-season record for receptions and set the record for single-season receiving yards and receiving touchdowns… led the country in receiving touchdowns while ranking 10th in the FCS in total touchdowns, 16th in receiving yards per game (89.3) and 18th in receptions per game (5.9)… tallied six games of at least 100 receiving yards and eight games of at least 75… scored two or more touchdowns in five games… reeled in five or more catches in 10 games… had four catches of at least 40 yards… was the CAA Offensive Player of the Week after his performance against Maine in which he caught eight passes for a career-high 179 yards with two touchdowns, including a career-long 73-yard reception… added eight catches and two scores the following week against Weber State… posted six catches for 125 yards at Richmond… collected eight receptions for 114 yards and two TDs against Elon… had a career-high nine receptions for 134 yards against William & Mary and came back the following week with nine receptions for 107 yards and a career-high three touchdowns against Towson… had six catches for 123 yards and three scores in the FCS second round playoff matchup with Southeastern Louisiana… helped JMU to a 12-2 overall record, including a 7-1 mark in the CAA… the squad reached the FCS semifinals where they were eliminated by eventual national champion North Dakota State.

2020 (Freshman)
Played in all eight games, making four starts during the 2020 FCS season that was played in the spring of 2021… the Dukes went 7-1 and reached the FCS semifinals where they were eliminated by eventual national champion Sam Houston State… named a HERO Sports FCS Freshman All-American… was on the VaSID first-team all-state squad… caught 33 passes for 603 yards with six touchdowns, leading the Dukes in all three categories… averaged 18.3-yards per catch… ranked ninth nationally and led the CAA in receiving touchdowns… also ranked 26th in the FCS and led the league in yards per reception… was 32nd in country and second in CAA in receiving yards per game (75.4) and eighth in CAA in receptions per contest (4.1)… turned in two 100-yard games, including a season-high 143 receiving yards and two touchdowns on seven catches in FCS quarterfinals vs. North Dakota… had first career 100-yard game in FCS First Round with four receptions for 132 yards and a score vs. VMI… had 92 yards on four catches vs. Richmond… tallied a season-long 63-yard touchdown vs. UND… had three catches of at least 50 yards… scored first career touchdown vs. Robert Morris… tallied four or more catches in five games… had at least 85 receiving yards in five games… earned a spot on the CAA Football Commissioner’s Academic Honor Roll (Fall 2020).

2019 (Prep School)
Spent the fall as a prep student at Fork Union Military.

HIGH SCHOOL
Graduated from Highland Spring High School in Richmond, Va. in 2019… earned second-team All-Metro honors and named to the VHSL 5A First Team All-State squad as a senior… collected first team all-region and first-team all-conference accolades as a junior and senior… also gained first team All-804 mention as a senior… logged 36 catches for 880 yards and 12 touchdowns as a senior… helped Highland Springs to two state championships in 2017 and 2018 as part of their four straight Class 5 state titles… named the MVP of Big River All-Star Game.