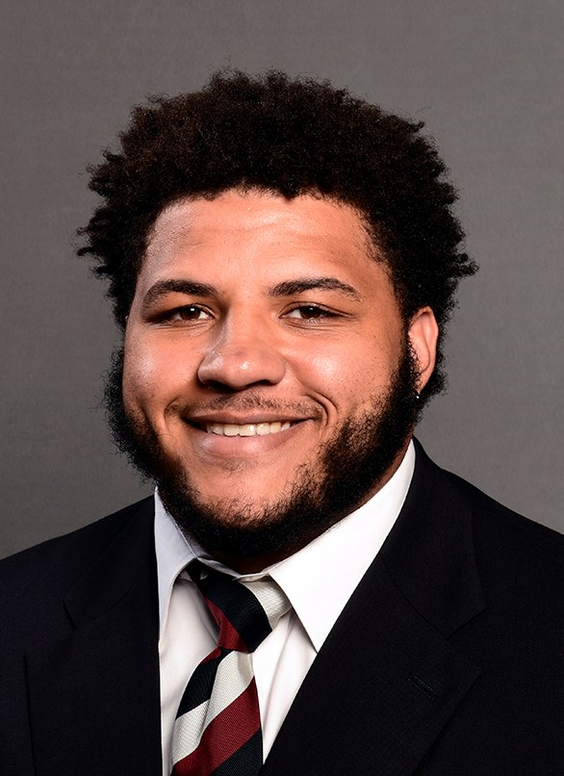 Veteran offensive lineman and the incumbent at the right guard position… named one of five Rex Enright permanent team captains in 2021 and the only one returning in 2022… listed on Athlon’s pre-season fourth-team All-SEC unit… has started 34 games, most on the squad, and all consecutively… considered one of the strongest players on the squad… is explosive and tough… leader by example… a regular on the SEC Academic Honor Roll.

2021 (Redshirt Junior)
Right guard who started all 13 games… selected by his teammates at one of five Rex Enright permanent team captains for the season… served as a game captain against Eastern Illinois, Kentucky, Tennessee, Florida, Auburn and North Carolina… selected by the Carolina coaches as one of three Strength & Conditioning Award winners… consistently graded out as the Gamecocks’ top offensive lineman… named the SEC Co-Offensive Lineman of the Week for his efforts in the win over Auburn… earned the Gamecock Toughness Award in the spring… named to the SEC Fall Academic Honor Roll.

2020 (Redshirt Sophomore)
Started all 10 games at right guard… part of the offensive line that helped Kevin Harris become the first Gamecock to rush for 1,000 yards in a season since 2013… named to the SEC Fall Academic Honor Roll.

2019 (Redshirt Freshman)
Redshirt freshman who played in all 12 games, making 11 starts… moved into the starting lineup at right guard in week 2 against Charleston Southern and held that role for the remainder of the season… was limited in the spring while rehabbing a foot injury… named to the SEC Fall Academic Honor Roll.

2018 (Freshman)
Repped with the second team at left guard when fall camp opened… appeared in the season-opener against Coastal Carolina… suffered a foot injury that required surgery and was forced to sit out most of the season… redshirted… named to the SEC First-Year Academic Honor Roll.

HIGH SCHOOL
Graduated from Harding University High School in Charlotte, N.C. in 2018… anchored an offensive line that led the Rams to a 14-1 record, the 4A state title and a No. 4 ranking overall in the Tar Heel state… coached by Sam Greiner… named first-team all-state by the Associated Press… also named to the NC Preps All-Class and 4A All-State teams…earned first-team All-USA North Carolina football team accolades as selected by USA TODAY… named to the Shrine Bowl of the Carolinas, but did not play in the game… ranked as the 17th-best offensive guard prospect in the country, according to 247’s national composite rankings… Rivals ranks him as the 15th-best player in the Tar Heel state and the 18th-best offensive guard in the country… named to the PrepStar All-Atlantic Region team.

PERSONAL
Jovaughn Dakar Gwyn was born March 18, 1999… graduated in May with a degree in information science.