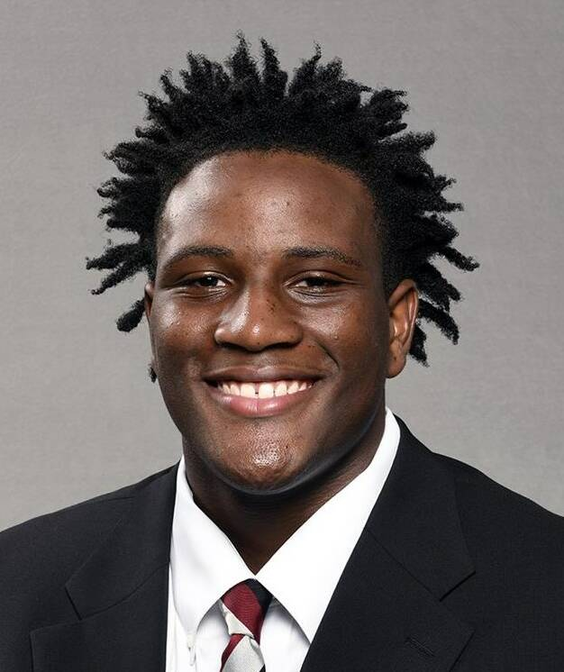 Third-year player who is expected to be even more of a factor in 2022… has the size, quickness, athleticism, and bring a lot of versatility to the table… has appeared in all 23 games over the past two seasons, making three starts… recognized as the Harold White GPA Award winner for the defense at the 2022 Garnet & Black Spring Game.

2021 (Sophomore)
Defensive lineman who transitioned to the interior of the line in the spring and held up well… saw action in all 13 games… credited with six tackles including four solo stops… earned the Gamecock Toughness Award for the defense in the spring as selected by the coaches… named to the SEC Fall Academic Honor Roll.

2020 (Freshman)
Saw action in all 10 games, making three starts at defensive end in his first season with the Garnet & Black… made his collegiate debut in the season-opener against Tennessee and credited with a pass break up… credited with his first tackle and a forced fumble at Florida… made his first career start in the win over Auburn… responded with a pass break up and a quarterback hurry in that contest… notched his first tackle for loss in a start at LSU… logged a season high with four tackles against Texas A&M… started at Kentucky and matched his high with four tackles… named to the SEC First-Year Academic Honor Roll.

HIGH SCHOOL
Graduated from Conway (S.C.) High School in 2020… played on both sides of the ball… recorded 92 tackles including 24.0 tackles for loss and 4.0 sacks as a defensive lineman… also served as the team’s punter… the Tigers lost in the first round of the South Carolina Class AAAAA state playoffs in 2019… selected to the Shrine Bowl of the Carolinas… named first team all-state by the South Carolina coaches in 2019 and a three-time USA TODAY first-team all-state selection… collected 201 career tackles with 49 tackles for loss and 13 sacks… coached by Carlton Terry… one of just six finalists nationally for the 29th Annual Watkins Award given by The National Alliance of African American Athletes to the top African American male HS scholar-athlete… also played basketball and baseball for the Tigers, earning first-team all-state honors on the hardwood after averaging 20 points per game… was a two-time Region VI-5A Player of the Year…helped the Tigers reach the lower state basketball finals for the first time in history… invited to the North-South All-Star basketball game… Rivals considered him the sixth-best player in the Palmetto State and the 18th-best strongside defensive end in the country… listed as the fifth-best player in South Carolina, the 30th-best defensive tackle in the country and No. 301 overall in the 247Sports Composite rankings… considered the No. 184 player in the country in the ESPN300.