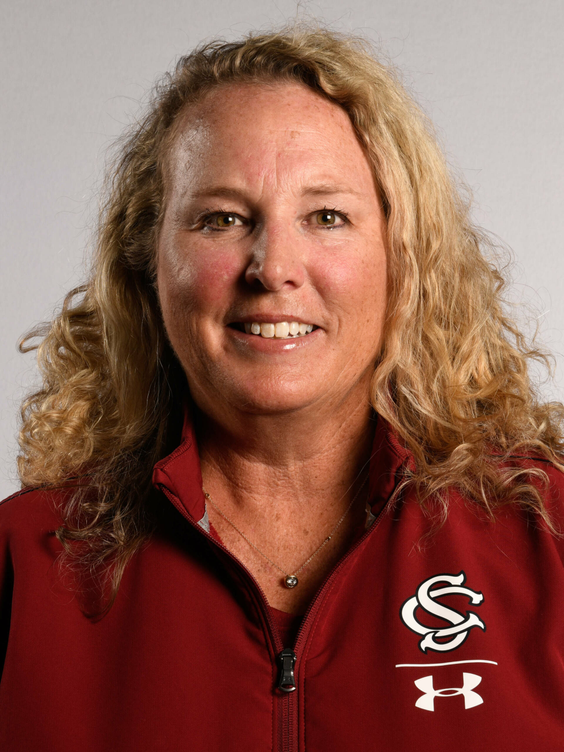 South Carolina has seen its star rise again in the collegiate softball world, and head coach Beverly Smith has guided that process since arriving as head coach in July of 2010. She oversees all aspects of the program and works most closely on the field with the pitchers. As a head coach, Smith’s overall record is 385-277, becoming only the second Gamecock softball coach with over 300 career wins.

From 2013-19, Smith guided the Gamecocks to a program record seven-consecutive NCAA Tournament appearances. Carolina was well on its way to its eighth-consecutive postseason trip in 2020 before the season was ended early due to the Covid-19 Pandemic.

The Gamecocks have competed in the regional championship four-consecutive completed seasons (also a program record), while the 2018 team reached the program’s second-ever super regional.

Carolina closed the 2020 season with a 17-6 record after the season was cut short due to the Covid-19 Pandemic. In the shortened season, the Gamecocks recorded wins over Ohio State, Kansas, No. 8 Michigan, Iowa State and No. 13 Georgia, among others. Haley Simpson led the way with a .353 batting average while Kenzi Maguire posted a team-best 20 hits. Katie Prebble had a team-high six home runs and 25 RBI. In the circle, Karsen Ochs posted an SC-best five wins while Kelsey Oh led the pitching staff with 51 strikeouts in 32.2 innings of work.

South Carolina finished the 2019 season with a respectable 38-19 record and reached its fourth-straight regional final under Smith. Under her leadership, the Gamecocks have now won 30 or more games each of the past seven years, the first time the program has done so since 2002 when it had 16-straight years of 30 or more-win seasons. South Carolina notably had a 15-game winning streak for the second-consecutive season, marking the first time since the 1996 and 1997 seasons the program won 10-straight games (or more) in back-to-back years. Smith earned her 300thcareer win as head coach at South Carolina in a 5-4 victory over Duke on March 20, 2019. The Gamecocks earned back-to-back series wins over Alabama and Auburn, becoming just the third team in the conference since 2005 to do so (11 chances). Carolina outscored the two rivals 30-20 over the two weekends with eight home runs. It was the first time since 2009 Carolina took the series over Alabama. Another notable streak continued in 2019 as the Gamecocks have had more than 30,000 fans come to Carolina Stadium for the past six-consecutive years. Carolina tied the program record for largest single-game crowd against Alabama with 2,250 which was previously set in 1997.

The Gamecocks finished the 2018 season with an impressive 49-17 (15-9 SEC) mark on their way to a third-place finish in the SEC, their best finish since placing second in the SEC East in 2003. Carolina used the momentum from a strong conference campaign in the SEC Tournament on its way to the program’s first Tournament Championship appearance since 2001. The 49 overall wins were the most since 1999, while the 15 conference wins were the most since winning 18 in 2003. In the polls Carolina finished 11th, its highest final ranking since 1997 and the second-best finish in school history. In total, the Gamecocks broke four season records as a team (home runs, RBI, HBP, fielding percentage and double plays turned) while Jana Johns broke three individual season records (HBP, assists at third and fielding percentage at third). For the first time since 1997, Carolina had five players receive All-SEC honors (Kenzi Maguire, Mackenzie Boesel, Alyssa VanDerveer, Johns and Kelsey Oh). With national recognition, the Gamecocks had three players named to All-Region Teams (Maguire, Boesel and VanDerveer) for the first time since 1999. In the classroom, Boesel became the 10thGamecock in program history (second under Smith) to take Academic All-America honors.

Over the course six years, the team has improved its final RPI from the NCAA from No. 37 in 2013 to No. 9 in 2018. During the past 10 seasons the program’s offense has posted some of its strongest seasons during Smith’s tenure, setting 28 team program records. In the per-game team records, Smith’s group holds eight of the 16 tracked. Gamecock pitching has improved markedly during that same tenure. From 2013-15, Smith’s staff improved its strikeout-to-walk ratio in each season, while the 2016 and 2017 groups posted the program’s first earned-run average under 3.00 since 2008 (2.82 in 2016, 2.96 in 2017). In 2018, the team had three different 10-plus game winners for the first time under Smith’s leadership while the trio of pitchers produced the team’s lowest ERA since 2007.

Many Gamecocks have broken out with their hard work under the watchful eye of Smith and her coaching staff. The 2018 leaders proved to be Boesel at the plate and Cayla Drotar in the circle. For the second-straight season, Boesel led the Gamecocks in nine different offensive categories (at bats, on-base percentage, hits, triples, batting average, runs, total bases, RBI and slugging percentage) while she paced the Gamecocks in two categories (doubles and walks) for the first time in her career. In the circle Drotar led the Gamecocks with 21 wins, becoming the first 20-game winner since 2015 and just the second in the past 16 years at Carolina. Drotar became the first pitcher not named Jessica Elliott or Nickie Blue to lead the team in innings pitched and wins since 2013. In league honors the Gamecocks had two players (Maguire and Tiara Duffy) named SEC Player of the Week while Johns became the first freshman in program history to be named SEC Freshman of the Week twice.

The 2017 breakout star proved to be Boesel, as well. She led the Gamecock offense in most categories, including setting a program mark for a rookie with 10 home runs and a .441 on-base percentage. The 2017 Southeastern Conference All-Freshman Team honoree also garnered third-team All-Southeast Region honors from the National Fastpitch Coaches Association (NFCA).

In 2016, Kaylea Snaer led NCAA Division I in doubles and broke the Gamecocks’ and SEC’s single-season marks, settling at 27 on the year. Alaynie Page set five single-season records, including a new program record of 15 home runs for a Gamecock during her 2015 NFCA First-Team All-America campaign, the first for a Gamecock under Smith.

Duffy also earned SEC All-Freshman Team honors in 2015 as she led the Gamecocks at the plate and in the outfield during the year.

In 2014, Ashlyn Masters posted 15 single-season top-15 marks, including setting what was a new record of 0.34 doubles per game en route to NFCA Second-Team All-Southeastern Region accolades. Snaer and Nickie Blue also earned SEC All-Freshman Team honors during the year, with Blue leading the nation in saves as well as making the inaugural NFCA Division I Freshman of the Year watch list.

In Smith’s first three years, Samie Garcia paced the team at the plate in many regards. As a senior, Garcia gained 2013 First-Team Easton All-America recognition after hitting .397 on the campaign. The year prior, Lauren Lackey earned second-team Easton All-America honors, hitting .401 on the year, becoming the seventh Gamecock to hit .400 during a season. Page, Garcia and Lackey all gained All-SEC honors under Smith’s leadership during their career.
During those first three seasons, the 2013 Gamecocks advanced into postseason play for the first time under her leadership, earning spots in both the SEC and NCAA Tournaments. The Gamecocks set six team offensive records during the 34-25 campaign, including topping home run record set in 2012. The team scored a record 338 runs, held a .384 on-base percentage and slugged at a .450 clip. Closing the regular season with six wins in nine games, five coming on the road in SEC play, Smith led South Carolina to the SEC Tournament for the first time since 2007, where the Gamecocks defeated Kentucky in the first round. From there, the Gamecocks went to the Austin Regional, where they advanced to championship Sunday with two wins.

The 2011 squad made a 15-game improvement in Smith’s first year, improving in nearly every statistical category. The pitchers under Smith lowered the team ERA by over 1.50 runs and gave up 53 less hits in 60 more innings of work.

Two Gamecocks have moved onto the National Pro Fastpitch circuit during her tenor. Garcia spent three years in the league with the NY/NJ Comets and the Pennsylvania Rebellion, getting drafted by the Comets in the fourth round of the 2013 College Draft. Page played for the NPF’s 2016 champs, the Chicago Bandits.

Prior to coming to South Carolina, Smith served as the top assistant at North Carolina, working mostly with the pitchers and catchers. The final three years, she was the associate head coach after nine as an assistant. Smith helped the Tar Heels to two Atlantic Coast Conference titles in 2001 and 2008 and eight of their nine NCAA Tournament appearances. She served as the lead recruiter for the Tar Heels during that time, helping to bring in five All-Americans into the UNC program. She also helped North Carolina achieve a top-25 ranking in the USA Today/NFCA Coaches Poll at least once per season from 2006-10.

Smith also guided Crystal Cox to All-America honors, making the third team in 2006 after claiming ACC Rookie of the Year honors in 2003. Amber Johnson also garnered second-team All-ACC accolades during her time under Smith. In total, five of her pitchers claimed 10 all-league honors.

Her pitchers have also gone onto success as professional athletes and in coaching. Lisa Norris, a former All-ACC pitcher for Smith, took the 2010 NPF Diamond Sports Pitcher of the Year award for the pro league. Both Spaulding (Texas A&M) and Norris (Texas A&M-Corpus Christi) hold pitching coach jobs with NCAA Division I teams.

Smith’s catchers also stood out in the ACC, with three claiming all-conference honors. Ally Blake and Brittany McKinney claimed spots in 2010 and 2009, respectively, while Natalie Anter made the list four times from 1999-2002. Anter also played in the 2004 Athens Olympics with the Italian national team.

Born in Asheboro, N.C., and raised in Houston, Texas, Smith spent two years at the University of Houston, starting in the academic office before working as the athletics department’s marketing coordinator. She played and served as an assistant coach for the Tampa Bay FireStix of the Women’s Pro Softball League in 1997. During this time, she also coached Episcopal High School in Bellaire, Texas, to three state titles and a state runner-up spot (1995-98).

A standout player for head coach Donna Papa before joining her staff, Smith was the 1994 ACC Player of the Year. A dual threat, Smith still ranks ninth in Tar Heel history in slugging percentage, second in triples, third in RBI, fifth in shutouts and seventh in ERA. Smith was honored as one of the top 50 softball players in ACC history during the league’s 50th-anniversary celebration in 2002.

In addition to her coaching, Smith has been a speaker/clinician at many camps and conventions. She graduated from North Carolina in 1994 with a double major in speech communications and political science.