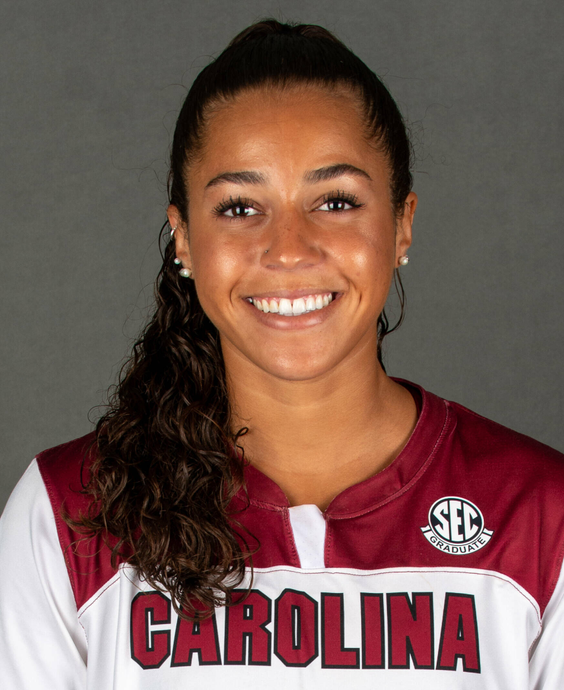 2021: Led the team in minutes played by a non-goalie, 1,955… Tied for third on the team with four goals, three assists, and 11 points, despite playing center back… Scored on four of her five shots on goal… Her lone game-winning goal came against East Carolina (8/26) …First goal of the season came on a penalty kick against College of Charleston (8/22)… Named SEC Defensive Player of the Week during week 6 anchoring a backline that allowed just four shots on goal for the week against Vanderbilt (9/23) and Kentucky (9/26), and scored a goal against UK… Notched an assist in back-to-back NCAA matches against Hofstra (11/19) and Penn State (11/21)… Tallied points in back-to-back matches three times on the season… Played in every minute of eight matches, including a double-overtime game against Georgia (10/15).

2020-21: Continued her streak of starts throughout the 2020-21 split, and shorted, season by starting all 16 matches for the Garnet and Black… At the end of the season her consecutive starts streak sits at 59 matches that dates back to her freshman season in 2018… Due to the roster, was moved from her normal defensive holding midfielder position to a center back during the spring portion of the season… Nearly matched her career-high numbers offensively despite the shorter season and moving to the back line, scoring four goals and adding a pair of assists to finish tied for second on the team with 10 points… 50 percent of her 16 shots were on goal during the season… Scored her first goal of the season against Missouri in the home opener, scoring via a free kick… Scored in three-straight matches during the spring portion of the season, scoring insurance goals against the College of Charleston, Coastal Carolina and Elon all while playing at the center back position… Tallied back-to-back assists during the fall, including helping on the game-winning goal against Mississippi State… Played for a total of 1,414 minutes during the year the most on the team… Played in all but 37 minutes for the Gamecocks during the season, including each of the last four matches… Helped the Gamecocks post a goals against average of 0.87, allowing 14 total goals and totaling six clean sheets as a member of the back line during the spring… Was named First Team All-SEC as a midfielder for the first time in her career… Was named the SEC Defensive Player of the Week and mentioned on the TopDrawerSoccer.com Team of the Week after her performance against Elon… Earned a pair of postseason nods from the United Soccer Coaches, including Scholar All-Region and All-Southeast Region… Named on the SEC Preseason Watch List for the second-straight year.

2019: Started all 24 matches for the Gamecocks during her sophomore campaign, scoring two goals and adding two assists in the midfield… Scored in back-to-back matches during the SEC regular season… Scored the game-tying goal against Alabama to help the Gamecocks complete the largest comeback under Shelley Smith in a 5-2 win on the road… Fired in the game-winning goal for the Gamecocks against No. 13 Arkansas at home in a 1-0 victory… Assisted on goals against William & Mary and Purdue… Was a part of the Gamecocks stellar defense that held all three of Carolina’s opponents scoreless in the 2019 SEC Tournament… Was named to the SEC All-Tournament team for her efforts helping the Gamecocks capture their second tournament crown in program history… Played all 90, or more, minutes 13 times during the season, including not missing a single minute over the final eight matches of the season and the entire SEC and NCAA Tournament… Played over 2000 minutes during the 2019 season… Was named All-SEC for the first time in her career.

2018: Played in all 21 matches and started 19 for the Gamecocks… Finished second on the team with four goals and third on the team in total points with 11… Made first career start against Clemson (8/23), playing all 90 minutes… Scored first career goal against Purdue, and later added her first career assist on the game-winning goal in the 2-1 win… Notched her first career multi-point match with a goal and assist against Wake Forest (9/6)… Scored her only game-winning goal against Wake Forest… Scored an insurance goal against Coastal Carolina (9/9)… Was named SEC Freshman of the Week after her performance against Wake Forest and Coastal Carolina… Registered her first career NCAA Tournament goal in the win over UNCG (11/9) and added an assist later in the match… Only Gamecock to register multiple three point matches this season… Played in all 90 minutes or more in 14 matches, including all 110 against Vanderbilt… Named to All-SEC Freshman Team and TopDrawerSoccer Postseason Top 100 Freshman.

PRE COLLEGE: Competed for the PDA Gunners and Sky Blue of the Elite Clubs National League (ECNL)…helped her club win the 2016 ECNL National Championship…participated in the U.S. Soccer Federation ID2 Camp and was invited to the National ECNL ID Camp in 2017…garnered All-Conference and All-State honors while leading Red Bank Catholic School in goals as a freshman, sophomore and junior…Red Bank Catholic won the Non-Public A South Section Title and the Non-Public A Co-Championship during her time there…was a nominee for the High School All-American Game in 2017.

PERSONAL: Born Apr. 8, 2000…daughter of Jill and Eric Harris…member of the National Honor Society…received the Academic Excellence Award all four years while at Red Bank Catholic School… Earned her bachelor’s degree in May of 2022 in early childhood education.